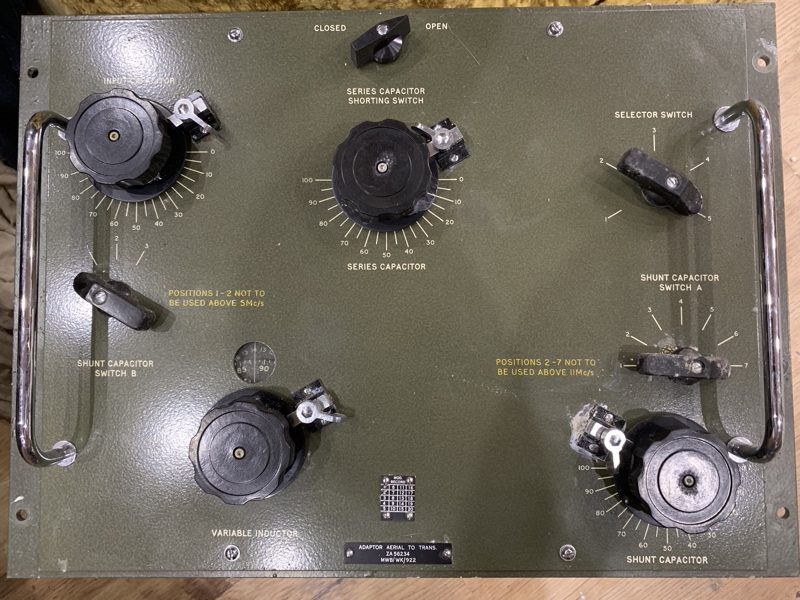 When I was helping the oilman deliver heating oil to the house, I found that some idiot had put it outside, next to the oil tank with just a piece of crap roofing felt on top of it to protect it, basically was far from happy with this…

Thankfully, the Larkspur D11 Station Antenna Tuner was built for military (which maybe why they just did not call it a Larkspur Antenna Tuner) use and although laid on its side, it lasted much better than my old computer server that was next to it with its 10 Hard Drives and Dual CPU Motherboard, RAM and Video cards that were basically now just water-logged and covered in rust!

Even this tuner when I first picked it up to bring it back into the house had the lovely sloshing sounds of water within it so was kind of expecting the worst.

Very annoying though, this unit was mint when I was given it, not a scratch on it, now though it was covered in shit (literally chicken shit), dirt, and scratches all over it with paint missing, etc.

Basically, not happy at all.

After tipping out rusty coloured water I checked out the inside, the two rear mounting plates seemed to have taken the worst of the corrosion, with the one on the right totally un-cleanable, I will now have to remove both of these and send them off to be recoated.

The rest of the box needs a dam good clean and hopefully all of the fixings should clean up OK with a little oil and grease and some work.

Thankfully the glass insulator is still intact, these nowadays are as rare as rocking horse shit and even when found can be stupid money to replace.

All of this will hopefully clean up and I may just have to re-paint the outside once I can get hold of the official paint.

Looking at the ‘Shunt Capacitor’ in the bottom right hand side of this image you can see the bit that I am really worried about, you can start to see oxidation around the locking mechanism, this will have to be removed and cleaned thoroughly, I am just hoping that it has not affected the painted faceplate too much as to get this re-done we are talking hundreds of pounds and a lot of work.

The ‘Shunt Capacitor’ itself seems to have taken the worst of the water affect, thankfully these are fairly easy to clean up and even if it needs to be dismantled and cleaned properly, it will only take a few days.

After looking over the unit a bit more I have decided that the best course of action will be to totally strip down the unit, clean every single part and rebuild it, this way I will be able to check over all of the moving and non-moving parts and make sure that all parts are cleaned and oiled as required before I test the unit.

If anyone can help with any bits of documentation I would be very grateful, there seems to be a bit on the Larkspur D11 Station Tuner and Radio’s in general, but I cannot find anything on this actual tuning unit.

The small amount of information that I have found came from a great resource for anyone restoring military radios and that is a group called ‘The Wireless Set No.19 Group, it may not roll of your tongue easily but its got some fantastic information available.

Sadly though even this was a challenge for them.

The model number of the unit is ZA 56234. The Numbers underneath this are telling when the unit was made and by whom, in this example ‘MWB’ means that the unit was manufactured at Marconi’s site in Chelmsford, The WK is the date of manufacture (still trying to find some info on this code), and the ‘922’ is the actual serial number of this unit.

Below is one of the only mentions that I can locate on this unit, and that’s just showing how it was connected to the other items in the radio station which was mounted into the back of a 1 Ton 4×4 Austin K9.

Another great restoration project for the workshop.
Click Here