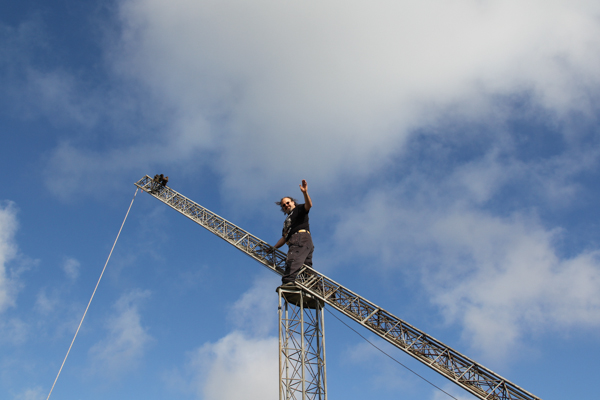 The Second Day at dismantling the versatower

Thankfully it was a nice and sunny day that we arranged for the man with a HiUB to arrive and take down the mast and move it to its new location in Laxey.

As with all of the dismantling work I carry out, I take regular photos so that I can make sure that I know how to put stuff back together at a later date, always better to be on the safe side.

One of the first jobs of the day was removing the counter weights from the bottom of the mast, fairly straight forward, and was easily removed with the aid of a hammer and a screw driver.

There were two different sets of counter weights on the base of the mast, the outer set was removed very easily, but the second set which are the two large metal plates took a bit of shifting, these plates needed to be pried apart with the aid of a screw driver and a hammer so that I could get my fingers behind them to pull them off the bolts holding them in place.

With the counter weights removed from the base of the mast extra care had to be taken in lowering the mast as it would now be top heavy, so to help this I got Douglas to control the base section whilst I pulled her over.

Whilst we waited for the lorry to arrive, Douglas (GD3RFK) and I set to work on the Gates Center Post and it was just as well we moved the center post out of the way, I think both myself and Douglas were not expecting the flatbed to be this big! Not a problem though..

With the HiUB in place the first job for me to do was get the chains positioned around the main mast section and try to get it balanced, once this was achieved I needed to look at the pivot pin. I was hoping that the Pivot Pin would not cause as much grief as it did, it started off with the old split pins that hold the washers in place were totally rusted through and refused to be knocked out, so I had to resort to cutting them off with a hacksaw.

I had managed to get the Pivot Pin to go through the head unit with a little brute force from a hammer, what I stupidly did not think about at the time was that if the tower section just dropped by a small amount, then my finger that was on the outside of the head unit steadying me would be caught, but of course you don’t think about these things and I must admit that I did think that the crane had all of the weight of the tower section, which it kind of didn’t… Opps.

So after knocking the Pivot Pin out the last little bit, the bloody thing dropped and just clipped the end of my finger squashing it to the consistency of a trodden on slug!

After shouting ‘Up Up’ at the crane Operator, he lifted the versatower section enough for me to reclaim my finger and then I came down the mast, at this point I felt OK, and surprisingly no real pain, then I went to wash it as ask Douglas’s kind wife for a bandage, it was at this point that it started to hurt a little (actually a bloody lot) so I had a short rest on the grass. 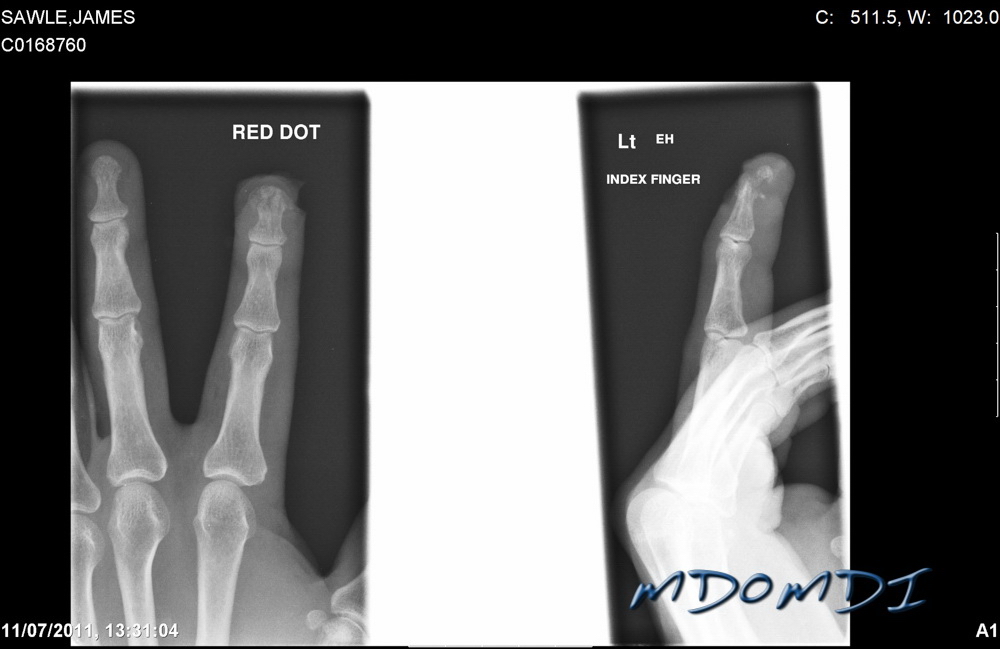 This X-Ray was taken about two hours later at the hospital showing the damaged end section of my Left Index finger which has now been removed, this of course means that I can no longer pick my nose, which I am sure I will be able to compensate with another finger!

Back up the mast with a bandaged finger and throbbing quite well at this point, I had no choice really as the crane was being paid for by the hour and I knew that I would not be able to sort this out again for at least a few weeks if not longer, so soldering on, I got back up there to knock the rest of the Pivot Pin out of place, and finally with some more hitting with a hammer and a bit of filing to clean off the burred over corners of the Pivot Pin, the Tower Section of the versatower was lifted away from its base where it had stood for 20 odd years. 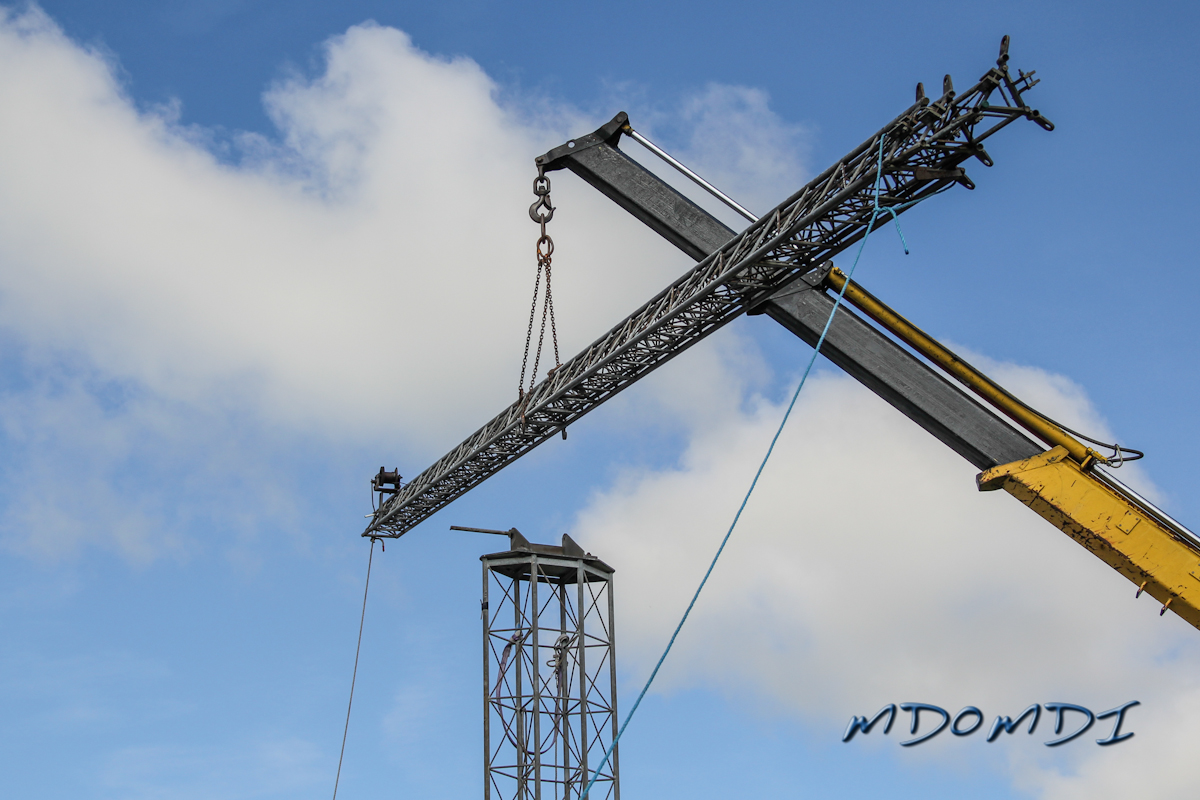 With some help from Douglas and I on the guide ropes at each end of the Mast Section it was placed on the back of the flatbed in under a couple of minutes, and I was starting to relax at this point, even though my finger wasn’t.

We quickly went and loosened off the nuts for the base section of the versatower, ready for the crane to lift this unit off as well.

Then a final climb back up the mast’s base section with my heavily bandaged finger and with it throbbing away to the beat of some house music, I went back up to clip on the chains so that this section could be lifted off.

With the old nuts removed and the crane supporting the weight, the base section was lifted up off the bolts and then pulled away from where she had sat.

With a little re-positioning of the chained she was lifted onto the flat bed and strapped on, at this point I made my goodbyes and drove off after the crane driver as I still needed to oversee this part of the delivery to Laxey before I could go to the hospital.

The Driver had to turn around at Liverpool Arms to make sure that he could get into the lane to my house, for this he had to be pointing towards Laxey, once this was done he was able to carefully drive up the small lane to the house and in front of the house.

He made short work of unloading the Mast Section of the versatower with the only difficulty being finding the center point to balance the sections, but once found the mast was removed from the flat bed and then placed against the wall on blocks of concrete and wood so that I will be able to work on them at a later time.

The base section was lifted off and placed onto a small trailer so that it can be dragged around the house to where it will be situated.

With the Mast Section now situated outside the house, I can get a good view of the state of the mast, and basically it is in a very good condition for a mast that has seen the most of 20 years being exposed to the wind and rain in Regeby. I will need to do a little cosmetic work and a final spray with Zinc pain and then a little Hamerite paint around were the guys are fitted, but none of this will be too hard.

The winch will be stripped down and cleaned thoroughly as it was a little tight, I might look into the cost of replacing this with an electric winch to make raising and lowering a lot easier.

The rusty section where the guys are attached are just cosmetic, there is no signs of anything more than cosmetic wear here and a simple wire brush and clean-up will sort this out, once done a coat of coloured hammerite will make sure that this lasts hopefully another 20 years.

With the mast now covered up, although I still have a small section uncovered that I will do when I get another tarpaulin, it can be left for a while, while I get the base section organised and a small amount of concrete to poor into a slightly big hole in the ground, though this will have to wait until my finger is a bit better!

All of the Photo's from the days events!

Playing with the Titanex V160 HD

There is nothing beteer than playing with a 160m Vertical antenna, This is the setup of Bob Barden's (MD0CCE) Titanex V160 HD.
Click Here

Quite a few Amateurs that own SteppIR antenna here on the Isle of Man suffer from breakages every year due to a quality issue.
Click Here
Douglas Dodd (GD3RFK)Ham Radio AntennasJames Sawle (MD0MDI)
0 FacebookTwitterTelegramLINEEmail