Top Posts
Wonderful gift from a new friend…
Had Enough
Stuck inside a body that is not mine!
All Alone with Cancer
Back on the island at last
Confusion, Non-Stop Sickness and 20 Hours a Day Sleep then more sickness.
It Really Hurts!
Nill By Mouth
My Worst Hospital Experience
Forced to Liverpool and F%€king Hating it!
Home Cancer Diary I Thought that I was used to pain!
Cancer Diary

I Thought that I was used to pain! 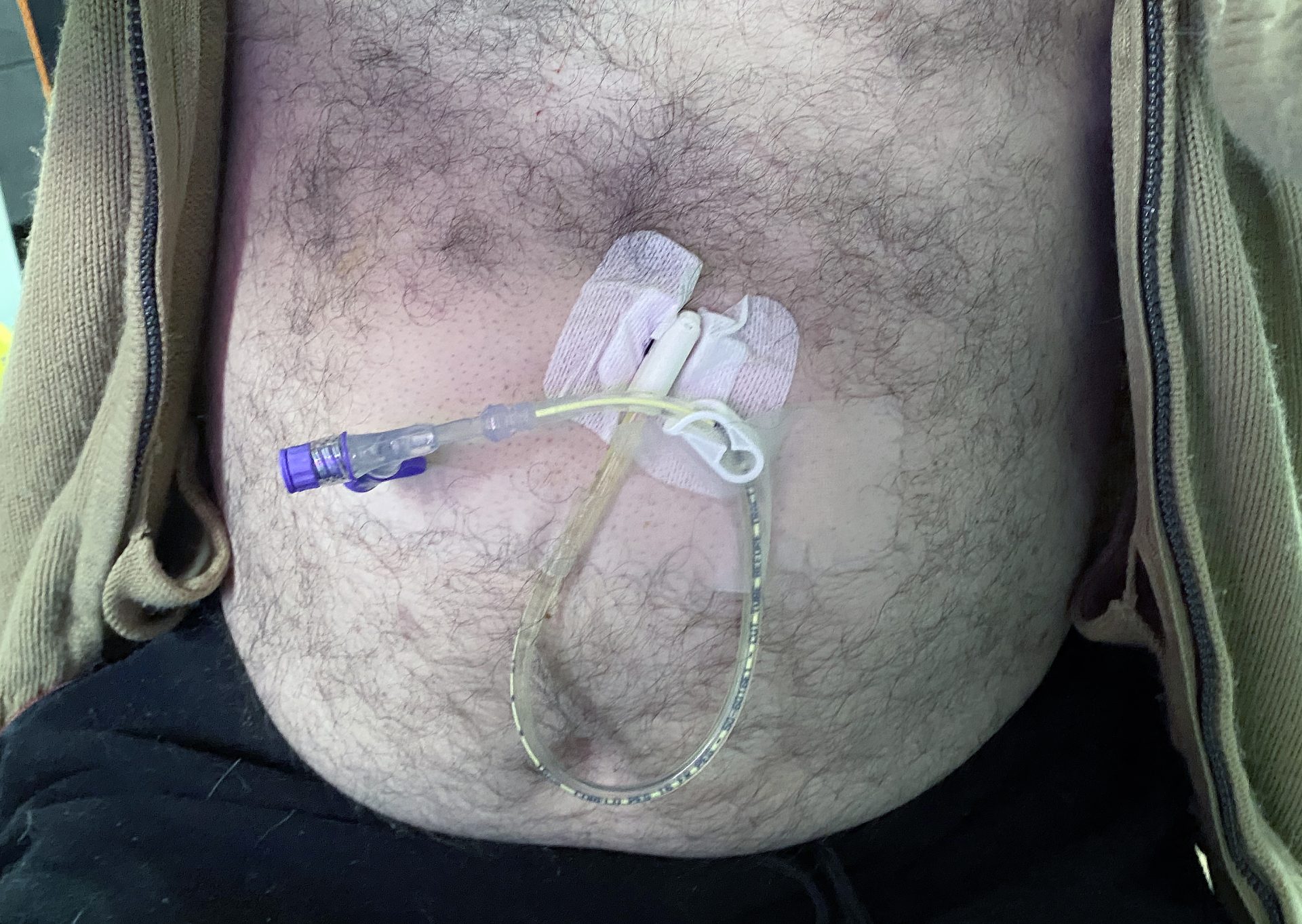 Yesterday I was in hospital by 7:30am for the bit that U have beed dreading, the surgery to have the Feeding Tube (PEG) fitted.

Thankfully I was first in and first out, although I do not remember too much of the waking up, I remember the transferring from one bed to the ward bed, this hurt a lot and I was asking for morphine  which followed quite quickly.

The next thing I was remember was around 13:30 as I was being woken up for Blood Pressure tests.

At this point all seemed alright.

The problem was with last night and today!

Last night was basically agony, they don’t tell you res, but every time that you move, you are in agony.

Going to end this hear as feeling sick….

That was not nice, threw up what was in my stomach and obviously every movement hurt like nothing I have felt before. This was what caused such a painful night, every time you moved it really hurt, and I’m not afraid to say, I spent most of the night in tears, in pain, waking up every hour it seemed. They never told me this when I was discharged, not that being prewarned would have helped, I’m taking oral morphine about every 30 minutes now, does seem to be helpful much, can only take codine 4 times a day, that does nothing, at least the cancer pain in my neck is so shadowed by this new pain.

On leaving the hospital last night I thought this is bearable but this is so diffeeent, can’t have a wash for 7 days, and cannot do any strenuous movements for at least a month, the truth is I cannot even get out of bed at the moment , every single movement is just so. Painful, I was hoping to go shopping tomorrow for food, but I cannot see that happening, this is a level of pain that I have never felt before, I broke my leg once when I was delivering a yacht to Florida, I had to strap it up and spend 3 weeks trying to sail across the pacific towards equator in what I thought was the worst pain anyone could ever handle, this is so much more, would not wish this on anyone, I hope this gets better.

Well, the reason for being quiet is because everyone ganged up on me after my temperature went to 3.9 and I was ‘told’ that I was I’ll.

So I had a very painful ride in the ambulance and finally only succumbed the pain when I think we turned off at the Kreg na Baa pub, thankfully the rest of the journey I was semi-alright, only slightly ruined by the person in the back screaming the walls down until pain relief was admitted, the problem was that the 20ml of Aral Morphine had basically done nothing at all to the pain and I am not ashamed at saying I was crying the wall of the hospital down. It got to a crescendo yesterday when one of the local nurses noticed that my fitted peg was digging in the front of my stomach and that this would be the cause of the pain.

The first time I pulled my t-shirt back, I was asked if I am allergic to anything, well it now looks like I am allergic to another two thing, the dye they put inside you for a CT Scan, and the sticky stuff on the rear of the electrodes that they put on you when they connect you up to machines, the fun caused all this…

Now a strange thing happens, a lot of doctors and consultants started coming down for a peak and always a permanently painful prod. The last of these that came down was the thankfully thick skinned surgeon that did the original incursion and by this time I had enough, I was hurting and making sure they knew it, I had been drip fed rubbish pain rellef all day, oral morphine was not helping at all, and because I was already given this they wanted to crack on, but I was not even letting them near me till I got some good stuff, and oral morphine does not cut it at all. They could not get  they finally found sone that could sign whatever and I was given some of the hard stuff, the problem was injection in means ‘go’ with the surgeons, so a little tugging too and throw.

I ended up loosing out, but by this attempt I was already scream the hospital down (literally), and then by the time they got hold of the out side of the tube and  started to adjust it, I was crying like a baby and screaming like a banshee entering the gates of hell, it was not a pretty sight I am sure, never had so much pain ever, well between I was taken into Nobles anyway, everything now hurt and hurt loads, it felt as though the surgeon was pulling my stomach out with shattered glass, not afraid to say, it’s been the worst week ever, the calming down period was pretty quick thankfully, I was left alone for about 30 minutes, and in that time I finally fell to sleep, and or felt good, and if it wasn’t for the mother of all mummy’s boy screaming out in pain, yet the pain was already gone when the nurses appeared, what pissed me off loads was that the mummy’s boy hand got up with his over demanding ‘I need attention’ ballad performance, anyway, he wa throwing his arms around so dramatically he managed to knock hid neighbours iPad off into some water, and then strangely he was marculously cured, awake, sore what he had done and then promptly vanished into the toilet to hide, obviously washing away all his sins, when he eventually did come out, poor old Ted thought he had done it, and strangely the mummy’s boy who was later renamed the mummy’s prick for keeping us all awake all night, about every 30 minutes is so there was the ‘fake’ I’m coughing myself to deaf, cough’. In between this was the constant ‘Miss’…. ‘Miss’, Missssssssss, as he could never find his alarm bell, and this was so much more dramatic,

The dramatics went on all night, often he would call out asking for the nurse, only to find his ‘Bell Push’, then for some unknown reason it strangely got lost again, 30 minutes latter, or there was the ‘Cough Cough’ dramatics, I’m dying, even everyone around the ward was finding this fun – NOT!

Below is the culprit of a lot of my monster reactions

Just so strange that these little things end up causing major reactions was told this could have so easily have turned into sepsis.

if it was left for another hour this could have been a lot worse, from all the blood tests that followed I was feeling very drain, Ok, I was knackered any, but after 7 vial’s were taken, and then 20 minutes later a further 8’ things seem to have drawn a crowd, I must be famous, or maybe the person in the next bed is famous, and I get it from slight accouasion if that’s a thing, through all of this you have to keep your sense of humour.

It’s now 13:00 and apparently Friday, lost a day somewhere as if asked I would have sworn it was Saturday, a lot of prodding has taken part today, cleaning has been quite painful, not sure if that’s because of what happened yesterday with the releasing of the pressure but it’s certainly a little painful, no where near as bad as it was, and I’m sure if anyone walks around with a hole in their gut and a plastic tube stuck in it, then I am sure this is normal, certainly on the hospital scale ifs between 1-3 depending on what I’m doing.

Waiting in hospitals really annoys me the basic nothing to gauge time passing is strange, like me swearing it was Saturday and yet no I have lost a day, been told I can go home, all items fitted or removed as applicable, I want out, and in theory there is nothing more to do, but ask the nurse’s and they know didley squat, I dare not fall asleep as they may take this as ‘I want to stay’ but really it is so much ‘I WANT OUT OF THIS’, first because I stink and want a clean, next because it is way too hot for someone that lives in an ice box normally, so use to a lot colder than this, I’m sweating not from being I’ll but the bloody heat in here, it seems the older ’Mothers Boy’ like the heat, well I am old now but I’m not that old and stupid yet.

Another lot of Chemo is not nice at all!